The eternal plan of creation
The eternal world plan applies to large as well as to small beings. The physical universe is built up with life within life, upwards and downwards into infinity. Everything is well fitted together as cogwheels in the works of a clock. All living beings have, just as God, an eternal I, which survives every created thing. As we are immortal, we can take advantage of all our experiences, life after life. All experiences show themselves, in the final reckoning, to be useful and beneficial for all and everyone. The divine plan of creation unfolds itself as completely loving, logical and methodical. This is explained through the followiing cosmic symbol:

The basic law of eternal life
To be able to create experience requires contrast. The greatest contrasts in life within consciousness are pleasure and pain or good and evil. To be able to experience the one, one must also experience the other. Seen from the perspective of eternity, pain and suffering are an unpleasant good. We survive, as already mentioned, all mental contrasts and ultimately derive advantage from them. In the physical world contrast is created with darkness and unpleasantness. In the spiritual world we experience the contrast with light and universal love. 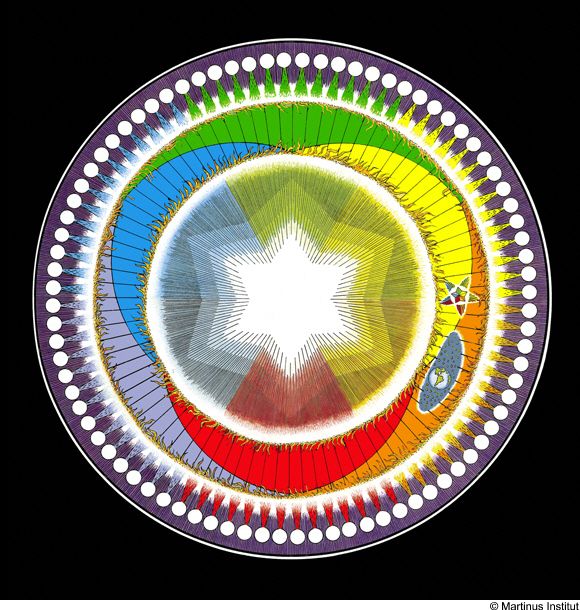 The stage of life
This eternal experience happens via 6 principles of existence – the plant kingdom (the red colour on the symbol), the animal kingdom (orange), the true human kingdom (yellow), the kingdom of wisdom (green), the divine world (blue) and the kingdom of bliss (light indigo). Here occurs life’s eternal interaction between God (the white star and the radiating field) and the sons of God (the outermost circle).

The plant kingdom
It is our satiation with the light and desire for contrast which leads us from the all-loving light zones to the physical world. In the plant kingdom begins the adaptation to life in the sphere of the killing principle. The consciousness here goes through its most primitive phase having only the ability to faintly sense the difference between pleasant and unpleasant.

The animal kingdom
Nature’s effect on the plant being, through thousands of years, stimulates the creation of organs for day-consciousness experience on the physical plane. Thus the plant being becomes an animal (orange). Adaptation to the killing principle can clearly be noticed in the evolution from plant to animal organism with attack and defence organs. The animal must either overcome or flee from its enemy. Its organism constitutes food and it must therefore protect itself with all means. The instinct for self-preservation gets stimulated.

The transition from animal to human being
The terrestrial human being is still partly an animal and lives therefore still to a high degree under the animal conditions of life – might is right. Even though the humane world religions for thousands of years have stimulated human beings away from the use of the killing principle, the humane ability is still of a far younger date in evolution.

It requires time to develop from selfishness and the survival instinct to the opposite – the loving, forgiving disposition. But the process occurs automatically as  ”we reap what we sow”. The moral of killing leads to suffering for us ourselves which creates a longing after the contrast, the humane. With time arises a susceptibility for the ideal of universal love and for an intellectual explanation.

The human kingdom
The purpose of The Third Testament’s eternal world picture is to guide humanity through the last stages of the transition from animal to human. We are on the point of being born into a new kingdom. Our intellect which was developed in the fight for existence makes it possible now to understand more and more advanced conceptions of ourselves and the world. With the harmonising of heart and reason the infinite cosmic horizon of consciousness gradually opens up. Then we have become  ”finished human beings in God’s image”, and are dwellers in the true human kingdom (yellow), where universal love is practised.

The spiritual kingdoms
From here the journey continues through the following eternal zones of love (green, blue and light indigo), where the eternal spiral cycle culminates in the contrast of light and happiness.

A universal world plan
The universe’s myriad of living beings in micro- meso- and marcocosmos have all the same simple, eternal fundamental analysis. The outer differences just reflect variations over life’s 6 principles of existence.

Martinus own explanation of the symbol is to be found in his book "The eternal world picture 1" The cosmic symbols of Martinus are copyright protected by Martinus Institut 1981.