1. The world's greatest religious command
Why should one study the cosmic analyses of the universe, which for some beings may be difficult to understand? Human beings have through their religions and world redeemers been shown the way to God! Is there really anyone who can see a better and more perfect way to God, or any real cultural guidance better than that which has already been given, for example in Jesus' “Sermon on the Mount” and other holy precepts of Christ? Can one get a better instruction on the way to the Light than this: “Love your God above all things and your neighbour as yourself”? The answer must be that it would be quite impossible to show any way to God, to Light, or make any absolutely perfect cultural creation, which has not first and foremost the same unshakable divine command in its instruction as life's real foundation. So it is absolutely not in order to lead human beings away from the holy commands of Christ, or away from any other of the great world religions and their more or less holy commands or instructions in morals and ways of living. Consequently the cosmic analyses and symbols concerning the structure of life are presented in such a way as to show that the core in the revealed great cosmic conclusions or religious dogmas of the past is the absolute truth.

2. The world situation or the announced “Doomsday”
That this demonstration is necessary is shown by the world situation today. It is such that one is obliged to express it as the condition of Armageddon, which, according to Christ, would come to human beings in the “last days”. Is it not further said in the biblical account about the future that “the devil shall rage in all his power”? What is it that we have seen in the form of the two World Wars, which have raged within terrestrial humanity in this century? Have we not seen attempts to wipe out populous towns with their inhabitants and cultural values? Have people not even tried to annihilate a whole human race? Have we not seen millions of human beings murdered - not only on the fronts in the defence of their country, or in the attack on other peoples' living space, but also in their civil life, being sent to gas chambers and here directly being murdered without any judicial or lawful proceedings, and naturally quite without any regard to the vitally important commands:
“ Thou shalt not kill”, “Thou shalt forgive thy neighbour”, “Put up again thy sword into his place; for all they that take the sword shall perish with the sword”? Is not the fulfilment of all the law just the command: “Thou shalt love thy God above all things and thy neighbour as thyself”? Where is the belief in a loving God and practical Christian culture in this Doomsday existence, where crowds of human beings, children as well as grown-ups, old as well as young, have languished unto death in the terrible concentration or death camps, which threw shadows of devil consciousness all over the earth?

3. The growth of human beings away from religious dogmas
Why have not the religious ideals, which have been proclaimed to human beings throughout thousands of years been able to prevent these devil-manifestations and the consequent deaths, invalidism, illness, distress and immorality? Is it not apparent that the inherited religious ideals or dogmas, however divine they have been, have not been able to free humanity from this terror epoch of Doomsday? Do we not see just that human beings simply grow out of these ideals, almost as children grow out of clothes and shoes? That therefore to lose the faculty to believe in them is natural. Have not millions of human beings become materialists and atheists? Is it not just as unshakable a fact that their numbers still grow? That there are more and more empty seats in the churches or in God's houses during the services? Does it not hereby become a fact that the highest life-conditional cosmic truths, religious commands or dogmas have become a mystery, have become something which one even thinks intelligent human beings cannot condescend to occupy themselves with or to believe in? Is there something the matter with the people, or are their religious ideals wrong?

4. Human beings who do not demand logical justification in accepting traditional religious ideals or dogmas
In the absolute sense, neither human beings nor their religious ideals are wrong. The religious ideals were perfectly adapted to the stages in evolution of those human beings to whom they were given. And for these people they were the principal basis of life A great part of humanity has outgrown these stages of development, and they have more or less grown up to higher stages in evolution. They live in quite a different mental sphere to the one in which the inherited religious conclusions or dogmas were adopted, and in which the beings concerned up to a hundred percent were able of surrender themselves by virtue of their, still to some degree flowering instinct. They were not yet so developed as regards intelligence that they demanded intellectual confirmation or reasons for their religious ideals or dogmas. To them it was enough that they were given by authorities.

5. Those human beings to whom the symbols and the “chief work”, to which they are a supplement, are presented
Today it is not like this. Today great masses of human beings have lost the faculty to believe, because their instinct has more or less degenerated on account of the development of their intelligence. They have thereby got the faculty to analyse, carry on research and to observe. All according to how this development increases it causes demand of logical arguments or scientific substantiation of each philosophical system or conception which they are to accept as truth. It would be absolutely absurd to blame these beings for their condition, for to them it is impossible to believe in these religious dogmas, just because they are only presented as conclusions or postulates without logical or scientific support. It is for this reason that the present “Book of Symbols” and the Chief Work, to which the symbols are a supplement, have been produced. This book is thus so designed as to help those human beings who cannot possibly believe in bare assertions or postulates without any intellectual or logical substantiation, but who, none the less, with heart and intellect, search for the justification for the condition of Doomsday, which they begin to perceive must exist behind the daily life's primitiveness and foolishness. To these human beings' cosmic study there is here opened a road to life's own over-all justification of the darkness in the world as a link in the creation of the eternal maintenance of the key-note of the universe: Love. 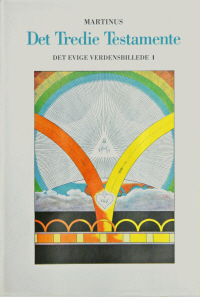