The Third Testament comprises all of Martinus’ published writings and symbols and, as a whole, constitutes a defence of everyone and everything. 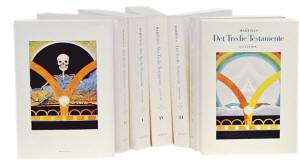 Livets Bog   (Which translated means: The Book of Life)

Everyone has vital roles to play in the gigantic theatrical performances taking place in nature, and which we call the universe. As the universe is being described here as something alive, it can be likened to a book – ”the book of life” that everyone is reading – every single moment. “The book of life” will help us to understand “life’s speech”, so that we can realise who we are, where we have come from and where we are going.

The cosmic symbols are gathered together in these 6 volumes.

Hundreds of articles exist – below some of these articles are listed and sorted by content. Some have been translated and published in the English edition of the magazine ”Kosmos” and some are collected in books. Articles that have not yet been printed in English are written in parenthesis.

• On the Birth of my Mission
• (Christmas Gospel)
• (Christmas Candles)
• Easter
• (What is Truth?)
• Pilate, Christ and Barabbas
• (The Way, the Truth and the Life)
• (Judge not)
• Why One Should Forgive One’s Neighbour
• (Thoughts concerning Easter)
• On the Altar of Love
• (Two Kinds of Love)
• (A Glimpse of World Redemption)
• (The Garden of Gethsemane)
• The Second and the First Resurrection
• (The Glory of Whitsuntide shining over Life)
• (Pages from God’s Picture Book)
• The Principle of Reincarnation
• The ”I” and Eternity
• (Immortality)
• The Immortality of Living Beings
• Through the Empty Space of the Universe
• The Galaxies of the Universe
• Cosmic Consciousness
• Concerning my Cosmic Analyses
• (The Psychic Temple)
• (The Great Baptism of Fire)
• (Mental Sovereignty)
• The Road to Initiation
• The Mystery of Prayer
• Meditation
• (The Sixth Commandment)
• (The culture of giving)
• (Out of Darkness)
•  (In ”the image of the animal” and in ”the image of God”)
•  (The Creation of Consciousness)
• (The World Situation and ”the image of God”)
• (God’s Creation of the Human Being)
• (Devil consciousness and Christ consciousness)
• (High Intellectuality and Low Intellectuality)
• Primitive and Intellectual Divine Worship)
• (The Longestsurviving Idol)
• (Mankind and the World Picture)
• (Between two World Epochs)
• Marriage and Universal Love
• The Fate of Mankind
• Life’s Theatre of Fate
• The Cause of the Fate of Terrestrial man
• World Religion and World Politics
• (The Creation of World Peace)
• The Road to Paradise
• Mankind at One with God
• The Necessity of Spiritual Science
• (The Creation of Culture)
• (Beyond the Fear of Death)
• The Ideal Food
• Primitivity and Superstition
• Unnatural Fatigue and Depression
• Mental Prisons
• The Road of Life
• (Mankind and the World Picture)

The Third Testament  – The Intellectualised Christianity*

* Based on unfinished manuscripts.