Martinus describes the spiritual process that gave him the consciousness of immortality the very prerequisite to be able to write the Third Testament in the following way:

"The “spirit of God” that, according to the Bible, “moved upon the face of the waters,” the “fire” that “burned in the thorn bush” before Moses, the “fire” that made Elijah ascend into heaven, the “fire” that “transfigured” Jesus on the mountain, the “fire” that appeared above the heads of the disciples and subsequently turned Saul into Paul on the road to Damascus, the “fire” that throughout all times has been the “alpha” and “omega” in every form of the highest creation, manifestation or revelation, was blazing here before my own eyes, vibrating in my own breast, in my own heart, enveloping my entire being. I felt as if I was bathing in an element of love. I was at the origin, at the very source, of everything warm in the affection of a father or mother for their offspring, and in the mutual devotion in the amorous love of a young couple. I saw the force that makes a hand sign a pardon, abolish slavery, protect life’s weak beings, the little animal as well as the frail human being. I saw the sunshine that can melt the ice and remove the coldness from every mind transform the barren deserts of hopelessness and pessimism into fertile, sunny regions in the consciousness, warm the heart, inspire the intellect and thereby induce the individual to forgive injustice, love his enemy and understand the criminal. I rested, so to speak, at the bosom of the almighty Godhead. I dwelled at the source of universal love; I saw divine perfection; I saw that I was one with the Way, the Truth and the Life, and that I was one with the great Father."

"For a more detailed account of revelation, the Holy Spirit or initiation I must refer the reader to my work Livets Bog. Here I will mention merely that such an elevated consciousness is always a personal experience, intended entirely only for the being in whom it takes place, and can of course never be a direct fact for a being other than the that it overshadows."

"The spiritual visions I had had thus mean nothing in themselves if they had not left behind effects that were visible and accessible for the faculty to perceive."

"That which is fundamental for the readers is thus not the spiritual experiences that I have had, but the effects they have created, since these can namely be investigated more or less by every human being who is morally suited, impartial and liberated. These effects constitute my collected manifestation, that is, the creation of a true, mathematical analysis of the world, an absolutely unshakable spiritual science and initial emergence of a new mentality, a new culture resting on this, in which the true understanding of life, its fine-drawn/subtle logic of love and culminating world logic and highest answer “Everything is very good” from being utopias goes over to being real life, tangible facts accessible for every human being that is developed or matured as regards reason and feeling." 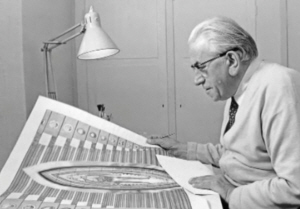 The following words were written in the evening of his life, when the collected works were finished and the only thing remaining to be done was to present it to the public with its proper title: the Third Testament.

“What is “Counsellor, the Holy Spirit”? It is absolutely not a new person, a new Christ, who would come to be a middleman between the Divine and the people. This “Spirit of Truth” is the revelation of the truth of the world. It is a science of the cosmos and consequently of God. It must be a record of the solution to the mystery of the universe. It is thus a book which people can read, just as they can read the Bible.

This “Counsellor, the Holy Spirit” predicted by Christ and which would be made manifest for mankind, is thus a “Book of Life” or “Book of Knowledge.”

But a real book of truth about the Divine and the universe can only constitute the continuation of the cosmic world culture begun by Christ almost two thousand years ago which we know under the term “Christianity.” It must be a book that creates an intellectual and not a dogmatic school or educational facility in Christendom. It must be a book, which reveals the completed Christian world culture in physical as well as spiritual manifestation. It must be a book that completely illuminates the culmination of darkness as well as of light and the abiding vital function in the universe coming from this, the immortality of living creatures.

It must be a book that can present infinity and eternity and their derivative living functions in the form of “space” and “time,” whose final result is “omniscient” and “omnipotent,” whose perfect co-operation constitutes universal love and in this way is the same as the eternal life in living creatures. We have come here to the “fixed point” of the universe and its source the “Father of Life,” the absolutely one and only all pervading radiant and eternal Divine.

Such a book can not avoid containing “the many things” Christ had to tell mankind but which God wanted to give coming generations later. Such a book can not avoid being “Counsellor, the Holy Spirit.” By its fundamental foundation of Christianity and by virtue of its relatedness to the two testaments of the Bible, it is legally proper to express it as “the Third Testament.” This Third Testament is consequently a book of wisdom or knowledge. It is the revelation of the eternal radiance of universal love, which again is the revelation of that “likeness of God,” which all living beings, through reincarnation or rebirth, are in the process of being transformed into.

Here in the Third Testament, all are unfinished creatures, which is to say “physical creatures,” animals as well as human, and are shown to be on the same path - a path which is unshakeably leading to cosmic consciousness and in that, to the experience of the golden nimbus of the universe, the golden light, the eternally alive in living creatures and in that to “Christ consciousness” and being “one with God.” Christ was, as we know, the model for the creation of God’s consciousness in man. Did not Christ say precisely, “All authority in heaven and on earth has been given to me.”? (Matt 28:18)

How could he otherwise be as “the likeness of God” without this capacity? And how could any other creature be created in this likeness without it necessarily leading to the same capacity? “Counsellor, the Holy Spirit” is thus in the form of the present Third Testament, a continuation of the proclamation of Christ. It is a continuation of the heralding of the eternal light from “the star of Bethlehem.” In this everlasting light, the solution to the greatest principles of life and, in that, Christianity’s unshakeable foundation, the foundation of happiness and blessedness, are revealed here for the world.